Mochi (もち) is a sticky Japanese rice cake made out of glutinous rice which is cooked and pounded until it turns into a paste that is very smooth and sticky. Later the paste is molded into the desired shape which in most cases is in shape of a ball or brick.

Mochitsuki is a very popular event in Japan, otherwise known as the mochi pounding ceremony, dedicated to share the love for mochi where it is prepared in a very large quantity and is enjoyed by the Japanese people. While it is enjoyed throughout the year in Japan, mochi is a traditional food for the Japanese New Year and is commonly sold and eaten at that time of the calendar.

Mochi is now becoming more and more popular in Asia where it is being enjoyed in various styles and forms just like it is loved and enjoyed in Japan. Here are 7 types of mochi which are very popular in Japan.

Sakuramochi is a Japanese sweet made of sweet pink mochi usually filled with sweet red bean paste and wrapped in a pickled cherry leaf. In Japan, sakuramochi is usually eaten and enjoyed on Girls Day and throughout the spring season in Japan as spring is the season in which the cherries blossom.

Warabimochi is a traditional Japanese jelly-like confection made from bracken starch (Warabiko) and topped with kinako (roasted soybean powder). The dish is loved for its soft and chewy texture and is a very popular dish in the summertime, especially in the Kensai region where it is often sold from trucks. Kagami mochi is a traditional Japanese New Year decoration which is usually made from two round mochi of different sizes.  The smaller one goes on top of the larger one and a daidai (a Japanese bitter orange) is placed on top of mochi. The Japanese people believe that kagami mochi symbolizes the continuity of the family over the years. They also have a ritual named Kagami Biraki which takes place on 11th of January where the kagami mochi is broken into edible pieces, with the hand or with a hammer and is eaten by the whole family. A knife is never used because that would mean cutting the family ties. Hishimochi is a ceremonial dessert that is associated with Girl’s Day in Japan. It is rhomboid shaped and is usually formed from three layers of pink, white and green mochi, from top to bottom. In different regions of Japan, hishimochi has 5 to 7 layers and is presented with hinamatsuri dolls on Girls Day which is celebrated on March 3 every year.

Botamochi are sweet Japanese balls made with sweet rice and sweet azuki (red bean) paste. The sweet rice is soaked for approximately 6 hours. Then the rice is cooked and the thick azuki paste is heavily enveloped around the pre-formed balls of rice. Botamochi is a popular sweet in Japan in the spring and autumn seasons. 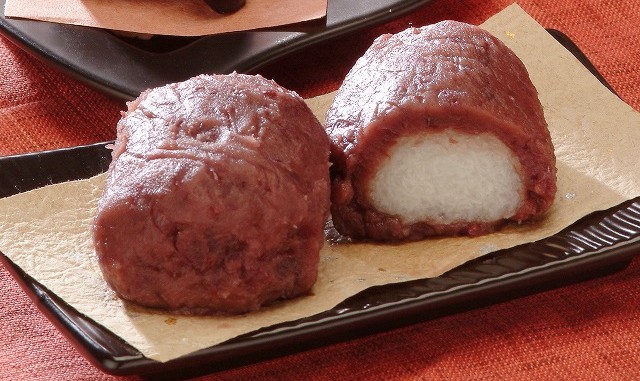 Kuzumochi is a cool, sweet summer dessert made with kuzu powder sugar and water. Kuzumochi is wonderfully chewy and sweet and has a jelly like texture. It is a popular summer dessert in Japan and is loved by the Japanese kids and grownups in the piping hot days. Hanabiramochi is a traditional Japanese sweet dish which is typically eaten and enjoyed at the beginning of the year. Hanabiramochi, also known as diamond petal cakes, are cakes for celebration consisting of burdock, soybean powder and bean jam. The dish is popular for its elegance and grace that’s it holds in such a small size. 10 Things to do on Golden Week in Japan »