Sumo wrestling (相撲) is Japan’s national sport and has a history spanning more than 1,000 years. The rules are simple: the wrestler who first exits the ring or touches the ground with any part of his body besides the soles of his feet loses. Matches take place on an elevated ring called Dohyo(土俵). It is a very popular sport in Japan and has gained popularity all around the globe in the last few decades. Despite its popularity, there is an awful lot more to sumo wrestling than most outsiders ever realize.

Here are a few of the amazing things you probably did not know about Sumo wrestling:

1. Sumo is a Religious Ritual:

From the very beginning it was linked with Shinto (神道) ritual, when it was performed at shrines to ensure a bountiful harvest and to honour the spirits known as kami (神). While Sumo is still very closely associated with its religious origins, Shinto principles still continue to manage the everyday life of today’s sumo wrestlers.

It would be easy to assume that Sumo wrestlers have a convenient and peaceful lifestyle outside their training schedule. In reality, their lives are probably the hardest and most disciplined of any athletes of the world. The sumobeya, or ‘stable’, is where the wrestlers live, eat, train and sleep throughout their career – unless they get married, in which case they are allowed to live in an independent dwelling. An average stable will contain around 15 wrestlers, and is arranged according to a strict hierarchy. Life is hardest for the lower ranked wrestlers, who are expected to get up earliest and cook, clean, serve food and generally wait on the higher ranked wrestlers. They even have to bathe last after training, and get last pick at dinner time. 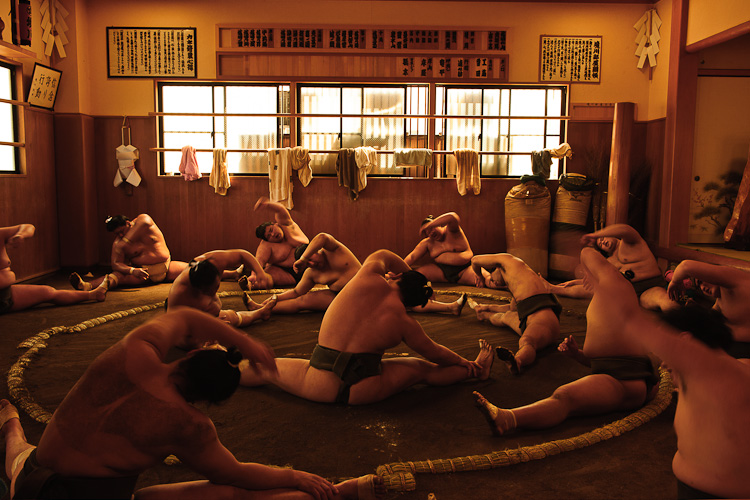 As absurd as it sounds, it is actually true. The Sumo Association banned wrestlers from driving their own cars after a serious car accident involving a sumo wrestler.

4. Only one Foreigner is allowed at each stable:

Sumo stables were once allowed to recruit as many foreign wrestlers as they would like to. Then, one stable recruited 6 Mongolians which resulted in panic and chaos, and today stables are only allowed to have one foreign wrestler at any one time.

Today, women have started playing almost every sport professionally and are gaining vast popularity but they are forbidden from participating in sumo wrestling. In fact, the Sumo Association doesn’t even allow women to enter the sumo ring, as it is considered a violation of the purity of the ring.